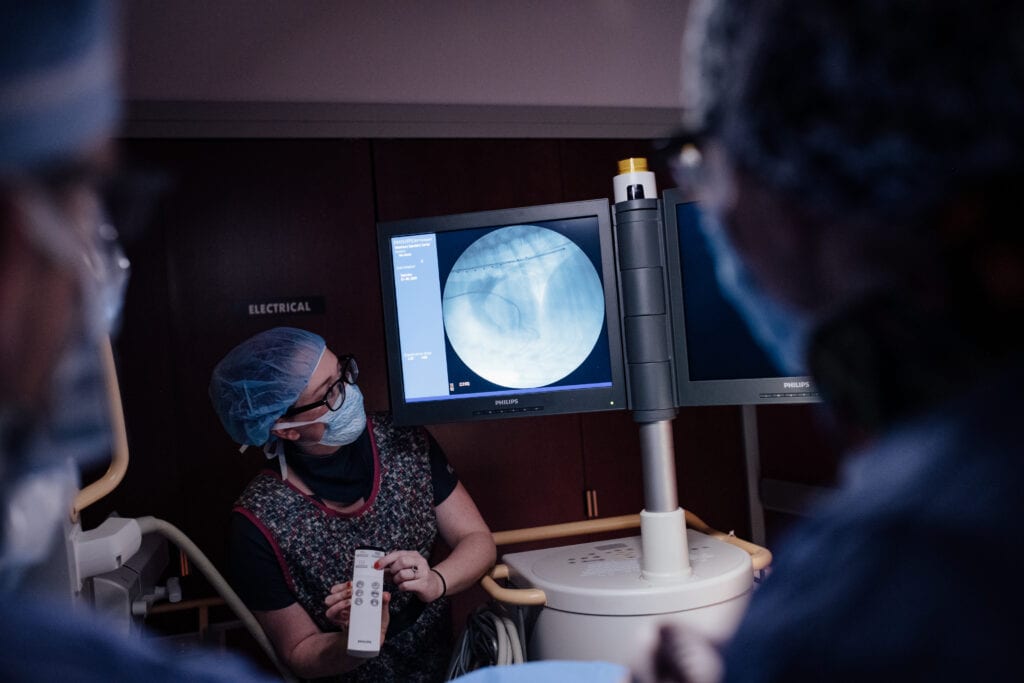 Dog and cat cardiology bears a striking similarity to human cardiology; they all have hearts that are divided into four chambers. The two top chambers are referred to as the right atrium (RA) and left atrium (LA). These are thin-walled structures that serve to hold the blood as it returns from the body (RA) and lungs (LA). The bottom chambers of the heart are the ventricles; these are the muscular pumping chambers of the heart. The right ventricle (RV) pumps blood to the lungs, whereas the left ventricle (LV) pumps blood to the body. The right and left sides of the heart are separated by a septum. The atria and the ventricles are separated by valves that open and close to ensure blood can only flow in one direction. The mitral valve is on the left side of the heart and the tricuspid valve is on the right side of the heart.

There are also valves that separate the heart from the major blood vessels that act as conduits to move blood through the body. The pulmonary valve separates the right ventricle from the pulmonary artery, which carries blood to the lungs. The aortic valve separates the left ventricle from the aorta, which carries blood to the body. The movement of blood throughout the heart occurs due to contraction of the chambers, which results from electrical impulses that are conducted through the heart walls. In normal heart conduction, an electrical impulse starts at the top of the heart (sinoatrial node or SA node), causing the atria to contract. The impulse is then conducted through the atrioventricular (AV) node to the ventricles, causing them to contract, pushing the blood around the body. 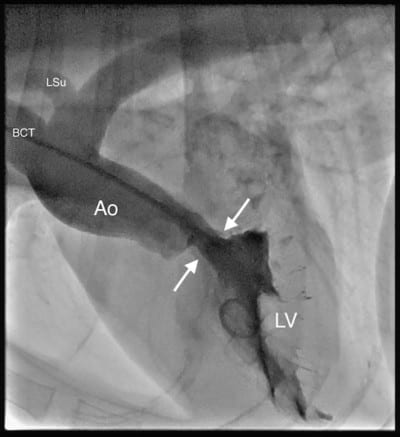 A minimally invasive technique called a cutting balloon valvuloplasty has been described to help patients with SAS. In this procedure, a small incision is made on the side of the neck in order to access the carotid artery. First, a balloon with very tiny cutting blades is inserted into the carotid artery and advanced into the stenotic subaortic region via fluoroscopic guidance. This balloon catheter has the unique ability to cut, or score, the stenotic region. A second high-pressure balloon dilation catheter is then used to dilate the stenotic area in a controlled fashion along with the previously established scores in the stenosis. This procedure can reduce the workload on the left ventricle, but reports indicate this is somewhat short-lived and the majority of dogs gradually increase in severity again back to their baseline over an average of 1-2 years. This has not been definitively proven to extend their life expectancy, but clinical improvement (better activity tolerance, improved body condition) has been observed. Risks associated with the procedure include general anesthesia, bleeding from the incision site/catheter site, ventricular arrhythmias (some of which can be life-threatening). This procedure is considered somewhat palliative but can be helpful for patients that are most severely affected by this disease.