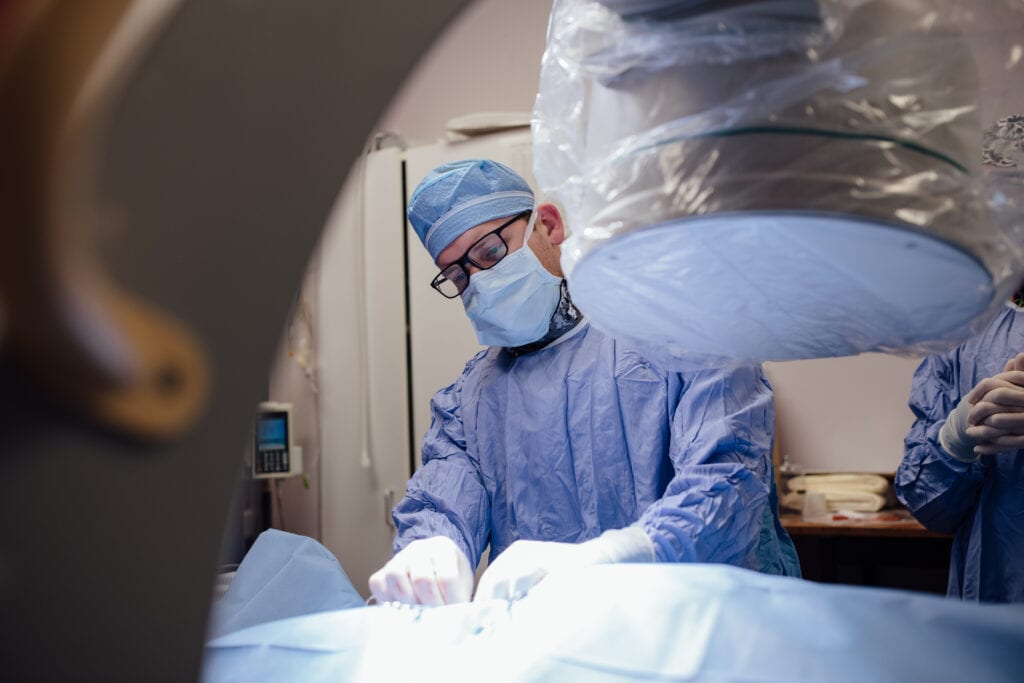 Dog and cat cardiology bears a striking similarity to human cardiology; they all have hearts that are divided into four chambers. The two top chambers are referred to as the right atrium (RA) and left atrium (LA). These are thin-walled structures that serve to hold the blood as it returns from the body (RA) and lungs (LA). The bottom chambers of the heart are the ventricles; these are the muscular pumping chambers of the heart. The right ventricle (RV) pumps blood to the lungs, whereas the left ventricle (LV) pumps blood to the body. The right and left sides of the heart are separated by a septum. The atria and the ventricles are separated by valves that open and close to ensure blood can only flow in one direction. The mitral valve is on the left side of the heart and the tricuspid valve is on the right side of the heart.

There are also valves that separate the heart from the major blood vessels that act as conduits to move blood through the body. The pulmonary valve separates the right ventricle from the pulmonary artery, which carries blood to the lungs. The aortic valve separates the left ventricle from the aorta, which carries blood to the body. The movement of blood throughout the heart occurs due to contraction of the chambers, which results from electrical impulses that are conducted through the heart walls. In normal heart conduction, an electrical impulse starts at the top of the heart (sinoatrial node or SA node), causing the atria to contract. The impulse is then conducted through the atrioventricular (AV) node to the ventricles, causing them to contract, pushing the blood around the body.

Some dogs and cats can develop abnormalities with the electrical system in their heart called arrhythmias. Pacemakers can be used to treat a variety of bradyarrhythmias (slow heart rhythms) such as atrioventricular (AV) block and sick sinus syndrome (SSS).

Third Degree AV Block, also known as “complete heart block”, is typically a degenerative change in most dogs. Third Degree AV Block is a medical condition in which the impulse generated in the SA node in the atrium is blocked at the AV node and is not able to be conducted to the ventricles. Some patients can have a 2nd degree AV block. Similar to 3rd degree AV block, 2nd degree AV block is a medical condition in which impulses from the atria are blocked from getting through the AV node to activate the ventricles. However, patients with 2nd degree AV block will still have some residual function of their AV node, so some of the impulses will continue to conduct through the AV node. When the heart rate is too low, which is typically the case with 2nd and 3rd degree AV block patients, there are accessory pacemaker cells in the ventricles that will initiate an electrical impulse to activate the ventricles. This is known as an “escape rhythm” and it keeps these patients alive. Unfortunately, escape rhythm heart rates are much slower (typically around 40-60 beats per minute, can be as low as 20-40 beats per minute) so these patients are often lethargic, unable to perform activities, and often are collapsing. Escape rhythms also have the potential to stop suddenly, resulting in the sudden death of patients with AV block.

SSS, also known as sinus node dysfunction, is a disturbance of the normal rhythm of the heart in adult/older dogs, and also occurs in humans. The hallmark symptom of SSS is a sudden loss of consciousness (fainting), also called syncope. Normally, a dog’s heart will beat at a rate as low as 50-60 beats/minute during sleep and as high as 160-180 beats/minute (and sometimes higher) during periods of stress or excitement. In SSS, the heart’s ability to simulate a heartbeat is compromised. Some dogs suddenly have a heart rate as slow as 10 beats/minute, even during physical exercise; causing a drastic drop in circulation. A dog may recover for hours or days before having another sudden drop in heart rate.

At other times, patients with SSS may have a heart rate that is suddenly very fast, causing a pounding heartbeat, also compromising the circulation. Overall, SSS is a progressive condition that causes erratic changes in the heart rate and has the potential to be life-threatening.

A pacemaker is the treatment for patients with advanced AV block and SSS. In most dogs, a pacemaker can be placed using minimally invasive techniques. Transvenous pacemaker implantation is done through a small incision in the neck region. This incision provides access to the blood vessels so the pacemaker lead can be directed through the blood vessels and implanted inside the heart using fluoroscopy. The pacemaker lead is then connected to a generator, which is a small computer that allows the cardiologist to set the heart rate to suit the individual pet’s needs. The generator is placed under the skin on the side of the neck (Figure A). The minimally invasive nature of this procedure allows most dogs to recover quickly after pacemaker implantation and can typically be discharged the following day.