Veterinary Specialty Center is excited to be the first and only veterinary hospital in Illinois to offer ECI® Immunotherapy, an alternative to chemotherapy, for the treatment of canine osteosarcoma.

What is ELIAS Cancer Immunotherapy or ECI®?

T-cells are removed and activated in the laboratory and infused back into the dog so they can better kill cancer cells. ELIAS combines it with vaccination. They produce a vaccine using the dog’s own tumor cells, so the immune system is first stimulated to recognize the unique proteins on the surface of the tumor cells.

How does it work?

Following the amputation of the affected limb and thorough screening to ensure the patient is a candidate for treatment, ECI is administered over 6-8 weeks and consists of two steps.

The patient dog undergoes amputation surgery of the affected limb. A tumor sample is sent to ELIAS’s lab, where a vaccine is created. This patient-specific vaccine is injected intradermally weekly for three weeks. 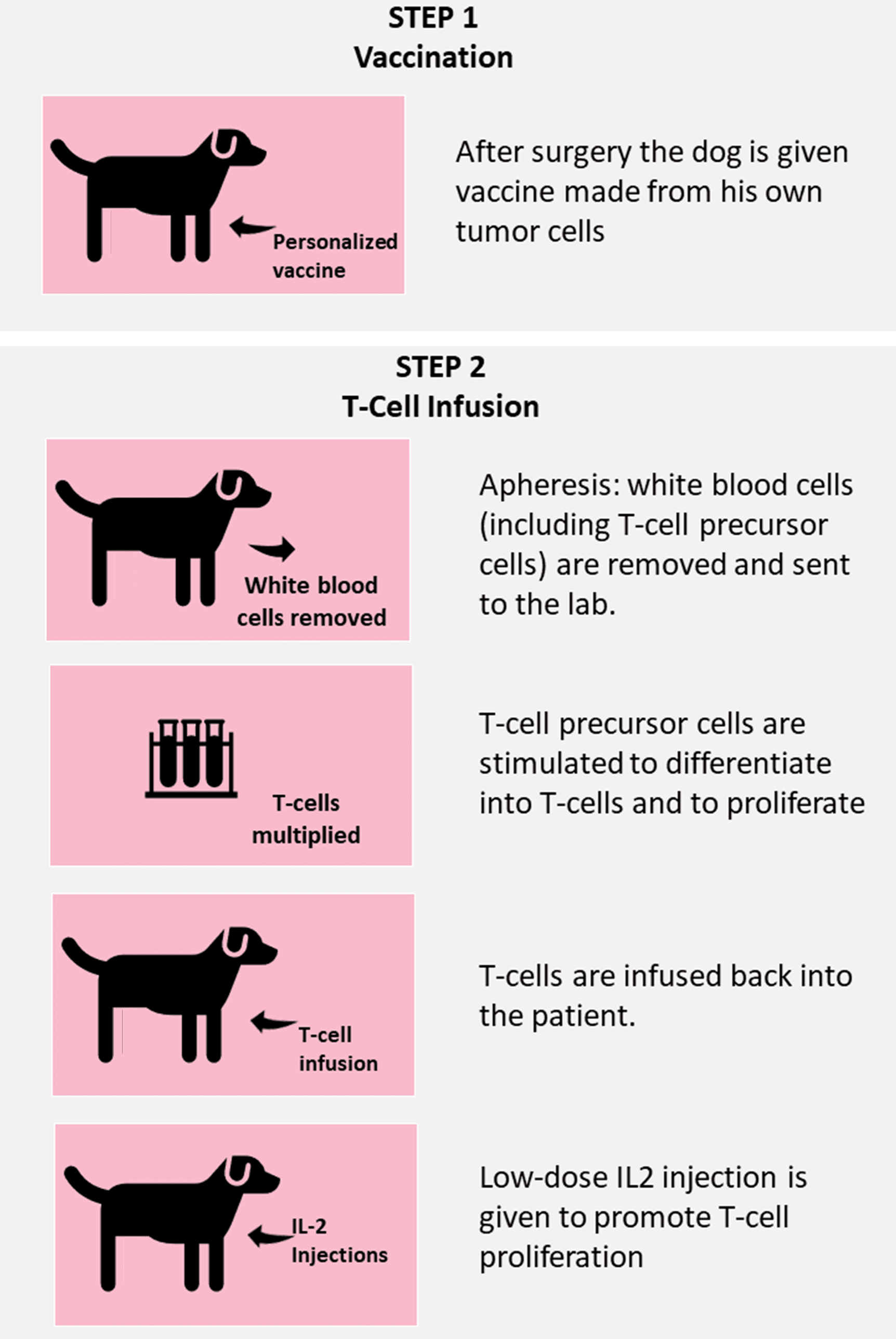 The goal of this step is to increase the number of primed T-cells that specifically target cancer neoantigens in the patient’s body. (Neoantigens are new antigens or proteins formed by cancer-specific mutations and found on the surface of tumor cells).

The white blood cells are removed from the patient in a procedure called apheresis. It takes 4-6 hours depending on the size of the dog and requires sedation.

The collected white blood cells are sent to ELIAS’s lab.

In the lab, mononuclear white blood cells are stimulated using a T cell-specific super-antigen. The vaccine-primed precursor T-cells are differentiated and activated into effector T-cells that can attack cancer.

These activated T-cells are shipped back to the clinic where, roughly seven days after apheresis, the patient receives an infusion of the T-cells.

What do we know about the safety of the treatment?

ELIAS has been evaluating ECI for several years by working with different veterinary teaching hospitals and clinicians.

In a trial recently described in a scientific conference paper, a total of 14 dogs with osteosarcoma were enrolled and evaluated.

Ten out of fourteen dogs completed the entire treatment protocol.

For all dogs, the treatment proved to be very safe and the observed side effects were mild to moderate and transient.

What is the standard-of-care treatment for dogs with osteosarcoma and does this immunotherapy treatment extend survival times?

The median survival time for dogs getting surgery (without chemotherapy) is 134 days.

The median survival time for dogs receiving surgery+chemotherapy is 308 days.

ELIAS reported a median survival time of 415 days for dogs who had surgery and ECI treatment. (No chemotherapy)

This means that half the dogs who finished their treatment survived beyond 415 days.

The survival times and quality of life have been impressive for some dogs, according to ELIAS. 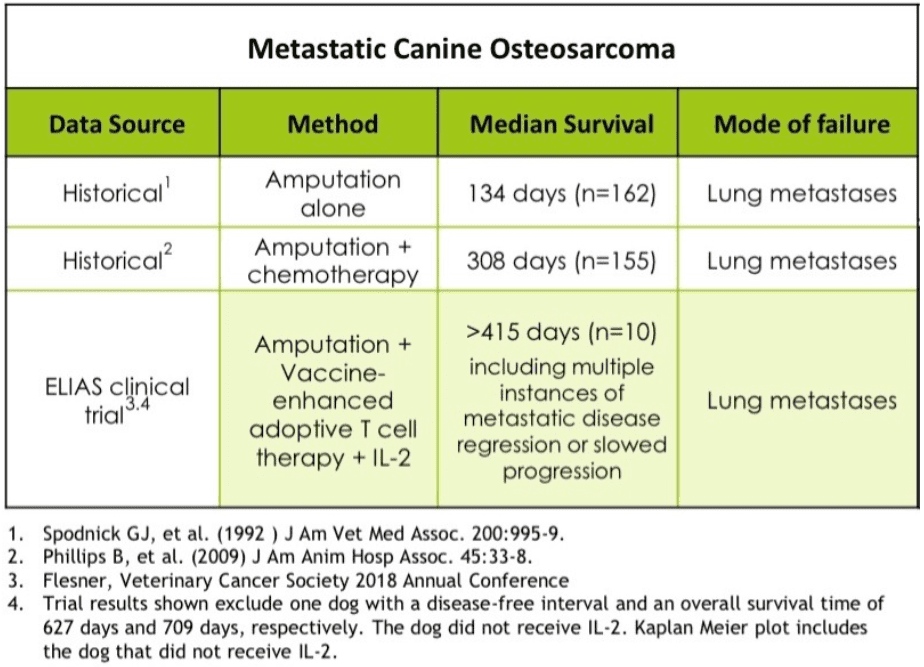 However, we have to remember that the study only had 10 dog participants, which is a very small sampling for the trial.

So their findings do not mean that roughly half of the dogs receiving the treatment are guaranteed to experience long-term remission.

A larger clinical trial is being planned, so they can better understand the efficacy and safety of the treatment.

What do we know about how different dogs responded to the treatment? 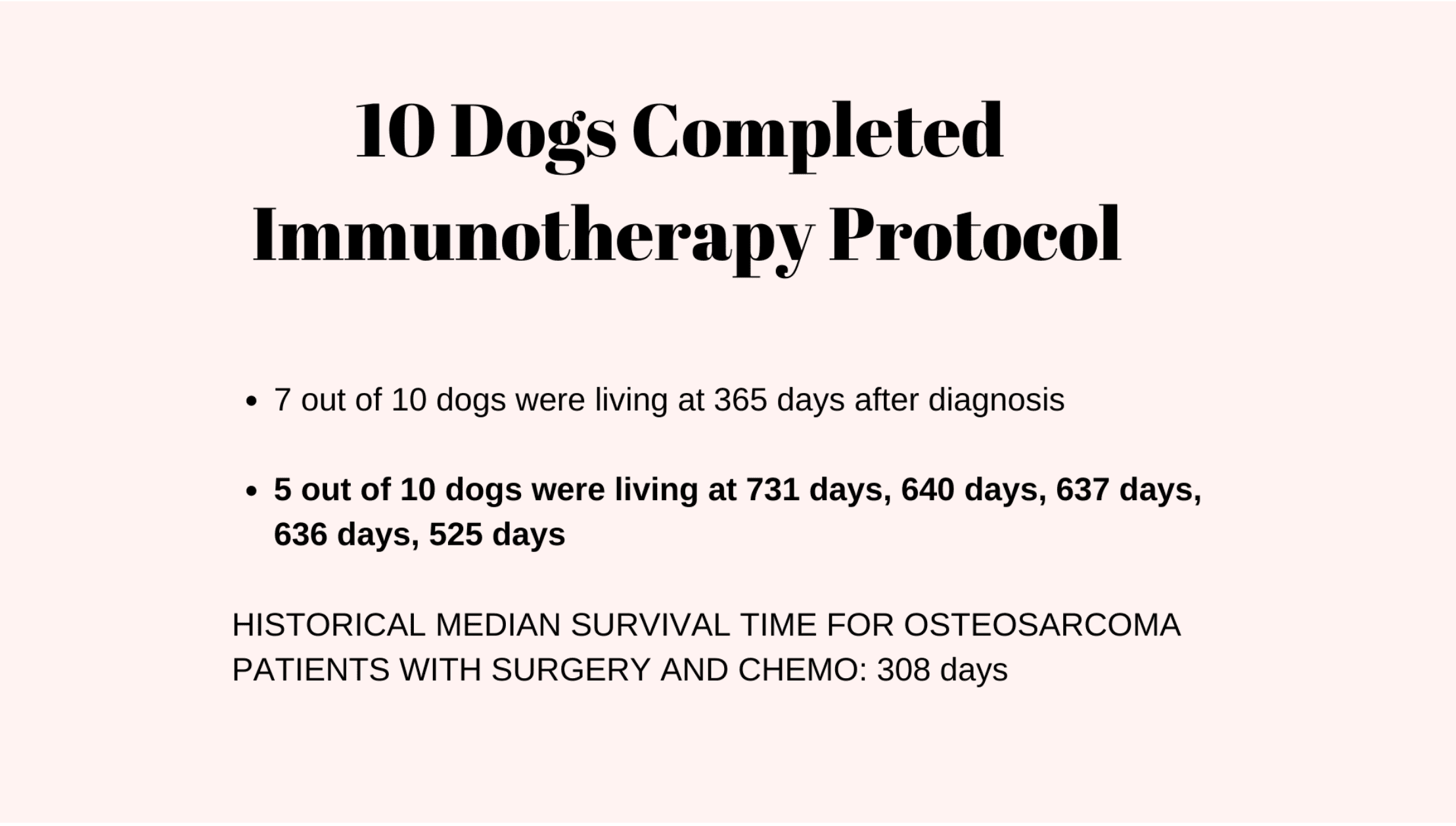 Five of the ten dogs that completed the treatment were still alive and disease-free at the time of the conference paper at the end of 2019.