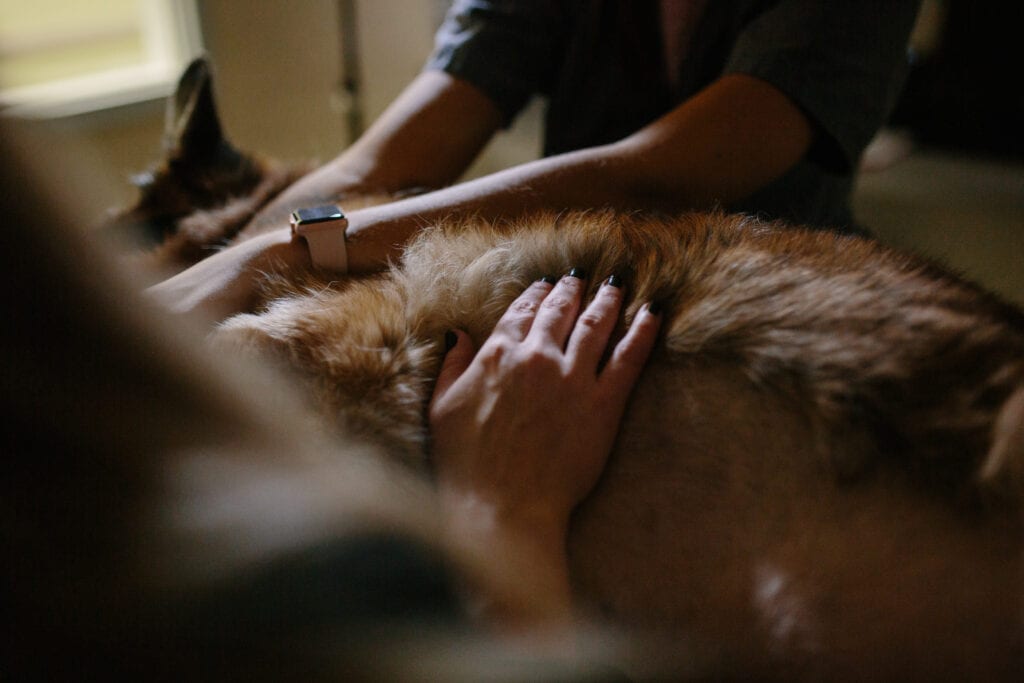 Degenerative valve disease (DVD) is the most common acquired heart disease in dogs. It is especially common in older, small breed dogs. DVD is typically a slowly progressive condition and not all dogs will develop clinical signs. Any valve within the heart can be affected by DVD, but the mitral valve is usually the one affected. This is the valve that separates the top and bottom heart chambers on the left side.

With degeneration, the valve leaflets and the strings (chordae tendineae) attaching them to the bottom heart chamber (ventricle) become thickened and irregular. This results in regurgitation (backward flow) of blood from the left ventricle into the top chamber (left atrium). There can be concurrent degeneration of the tricuspid valve (valve separating the top and bottom heart chambers on the right side) in about 30% of these patients. Less commonly, the aortic and pulmonary valves may be affected.

DVD is a progressive condition, meaning that the valve thickening and leakage will worsen with time. In a subset of dogs, the leak becomes substantial enough to cause heart enlargement. At this stage, many animals remain asymptomatic, but a medication called pimobendan/Vetmedin has been shown to delay the onset of congestive heart failure.
Eventually, the pressure within the heart may increase. This increased pressure builds up in the lungs and can result in leakage of fluid from the blood vessels within the lungs (called pulmonary edema). When this occurs, it is referred to as congestive heart failure (CHF). Pulmonary edema makes breathing very difficult since the lungs are normally filled with air instead of fluid. Clinical signs associated with CHF include lethargy/weakness, decreased activity level, coughing and/or increased breathing rate/effort. If any of these signs are noted, a veterinarian should be contacted immediately.

Uncommon secondary effects of DVD include pulmonary hypertension, arrhythmia, and rupture of the chordae tendineae.

The gold standard for treatment of DVD is repair or replacement of the mitral valve. Mitral valve replacement is not a viable option in animals at this time, and valve repair is only performed at a handful of institutions around the world. This procedure requires open-heart surgery with cardiac bypass and is usually cost-prohibitive (estimated cost of $30-40,000). For the majority of patients, the goal of treatment is to reduce the effects of CHF with diuretic medications (ex: furosemide, hydrochlorothiazide) and to decrease the workload on the ailing heart. Commonly prescribed medications include pimobendan, benazepril/enalapril, spironolactone, and amlodipine.

The prognosis for animals with DVD is highly variable with the majority of patients never progressing to the stage of CHF. Once the stage of CHF has been reached, the median survival time is 9-12 months and highly dependent on other medical conditions (ex: concurrent kidney disease) and the individual’s response to medications. Frequent follow-up consultations (generally every 3-4 months following the 1st episode of CHF) with a board-certified cardiologist to assess kidney values and screen for early CHF help improve both quality of life and longevity.

Since the degenerative process continues regardless of treatment, most patients will experience more than one episode of CHF. The severity of subsequent episodes can often be mitigated with close monitoring for clinical signs of CHF, especially increases in sleeping respiratory rates. At each episode, the medications are often increased or new medications may be added to further decrease the workload on the heart. Between episodes of CHF, the vast majority of patients experience an excellent, near-normal quality of life.