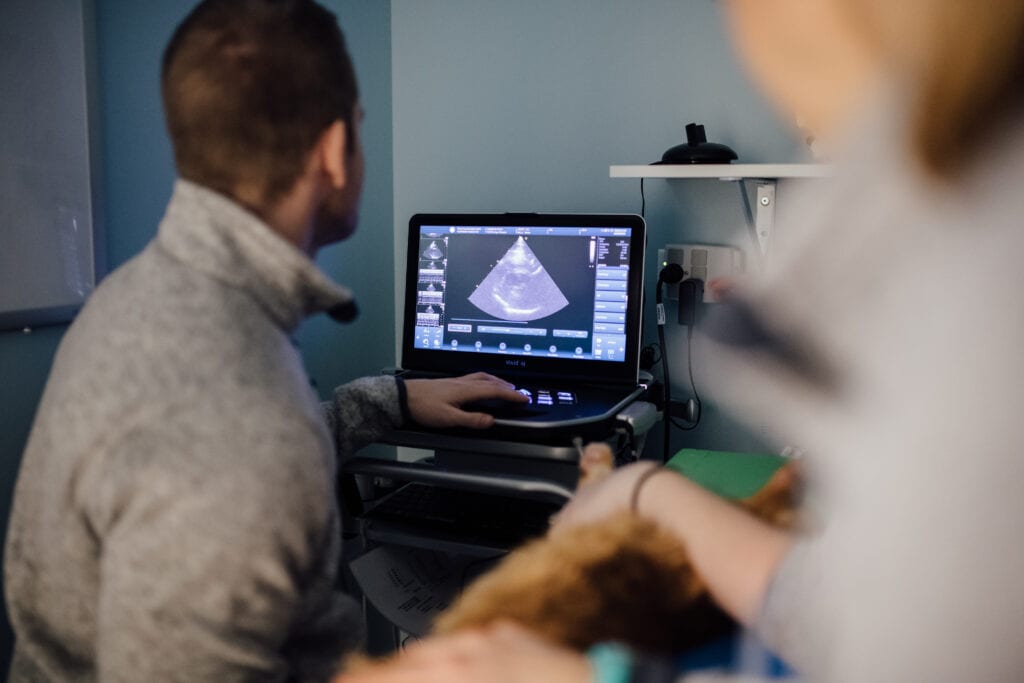 Dilated cardiomyopathy (DCM) is a general diagnosis provided for a heart that is enlarged with decreased pumping function/contractility (i.e. systolic dysfunction). There are several etiologies that can result in DCM. The most common cause is a primary heart muscle disease called idiopathic dilated cardiomyopathy. Idiopathic DCM is thought to be genetic in many cases based on human studies and the prevalence of the disease in certain dog breeds (Doberman Pinschers, Irish Wolfhounds, Great Danes, Golden Retrievers, etc.). Other causes of DCM include an abnormally rapid arrhythmia (tachycardia-induced cardiomyopathy; TICM), nutritional/dietary deficiency (ex: taurine, L-carnitine, BEG diets), hypothyroidism (low thyroid level), infection/inflammation of the heart muscle (called myocarditis), degeneration of the mitral valve in large breed dogs, and some toxins/drugs.

As the heart dilates and loses its ability to contract appropriately, blood begins to pool within the left side of the heart resulting in volume overload and an increase in pressure. Volume overload can lead to stretching and leakage of the valve separating the top and bottom heart chambers on the left side (mitral valve). As blood begins to pool within the left side of the heart, blood returning to the left side from the lungs is hindered. This results in leakage of fluid from the blood vessels within the lungs (called pulmonary edema). When this occurs, it is referred to as congestive heart failure (CHF). Pulmonary edema makes breathing very difficult since normally the lungs should be filled with air, rather than fluid. Clinical signs associated with CHF include lethargy/weakness, decreased activity level, coughing and/or increased breathing rate/effort. If any of these signs are noted, a veterinarian should be contacted immediately.

Some dogs with DCM also develop arrhythmia (abnormal heartbeats) as a result of their disease. Arrhythmias such as atrial fibrillation can further decrease the efficiency of the heart to move blood forward resulting in more rapid progression to CHF. Other arrhythmias such as ventricular tachycardia can result in sudden cardiac death. Some breeds are predisposed to developing life-threatening arrhythmias (ex: Doberman Pinschers) very early in the disease process; in some cases, before any clinical signs are noted.

The diagnostic work-up for DCM often includes an echocardiogram, chest x-rays, ECG, and blood work including a kidney panel, a troponin level, taurine analysis, and a thyroid panel. For those breeds predisposed to developing arrhythmia, a Holter monitor (24-hour ECG monitoring) is sometimes recommended. Specific diagnostics tests are chosen based on the history and breed as not all of these tests are necessary in every patient. Screening for this disease in high-risk breeds (i.e. Doberman Pinschers) is recommended at 4-5 years of age and includes an echocardiogram, ECG, and Holter monitor.

Treatment is ideally aimed at an underlying cause (if one is identified), and then alternatively aimed at slowing down the progression of this disease prior to the onset of congestive heart failure (CHF). Commonly prescribed medications include pimobendan/Vetmedin and enalapril/benazepril. Taurine and thyroid supplementation, a diet change, and/or anti-arrhythmic medication(s) may be recommended depending on the diagnostic results. Once CHF has occurred, treatment is aimed at resolving clinical signs with diuretic medications (ex: furosemide, hydrochlorothiazide) and to decrease the workload on the ailing heart. Commonly prescribed medications for this latter goal include pimobendan, benazepril/enalapril, spironolactone, and amlodipine.

The prognosis for animals with DCM is highly variable and somewhat dependent on the breed of dog. Some animals remain asymptomatic for years, while others progress rapidly to CHF. Approximately 1/3 of Doberman Pinschers will die suddenly before any clinical signs are noted. Once the stage of CHF has been reached, the median survival time is approximately 9 months. Frequent follow-up consultations (generally every 3-4 months following the 1st episode of CHF) with a board-certified cardiologist to assess kidney values, screen for occult (early) CHF, and assess for life-threatening arrhythmias are thought to improve both quality of life and longevity.

Since the disease process continues regardless of treatment, most patients will experience more than one episode of CHF. The severity of subsequent episodes can often be mitigated with close monitoring for clinical signs of CHF, especially increases in sleeping respiratory rates. At each episode, the medications are often increased or new medications may be added to further decrease the workload on the heart. Between episodes of CHF, the vast majority of patients experience an excellent, near-normal quality of life.